Change of tack this weekend - I decided to leave the 15mm alone and do some more work on the 6mm AK47 Republic project.
I finished off the regular infantry and commands from the ZNWI. To celebrate, I decided to tacke a run at one of the vehicles as well. 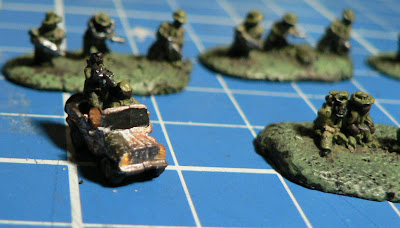 I only have the some mortars and RPGs left to finish off the ZNWI infantry, and then it's on to their trucks and technicals.
Posted by ScannableGoose at 21:23 No comments:

Brad came over on Sunday afternoon, and we managed to muddle our way through the first scenario (Contacting Trouble) from the Ambush Alley rules.

Play was slow and painful with many rules missed and dropped along the way.

Insurgent player managed to pull of some excellent reinforcement roles that saw 8+ Insurgents blocking each of the escape routes for the Marines and Contractors.The US won, but suffered high casualty rates, and we weren't sure in the end if they should have made it out of contact with the number of casualties they were carrying.

I'm clear now that I have a lot of reading up to do. The interruption rules that seemed so straight forward when I've read them previously became confusing on the table. The biggest problem was that I hadn't looked at the rules for a couple of months, and 10 minutes read beforehand was inadequate.

I'm planning to trying the single player variant rules over the next few weeks to firm up the mechanics before I unleash the game on anyone else.

Took some pics at the end of the game of last mauled US fireteam escaping off-board: 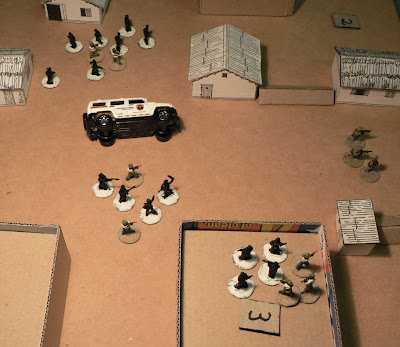 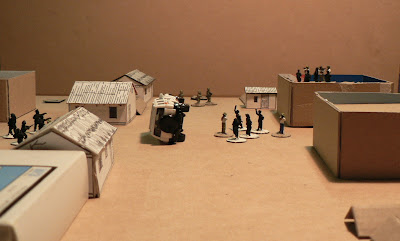 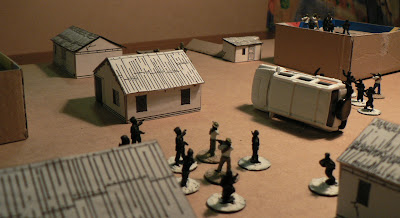 Posted by ScannableGoose at 11:46 No comments:

Bits and pieces from my latest order

Because there isn't a lot of photos of Irregular Miniatures stuff around the place, I'm trying to make sure that I take photos and post everything that I get my hands on.
The last order I place with Eureka was a mixed bag.
I needed to get the final 3 figures I needed for my ranger chalk, but it wasn't worth just getting those sent up. I perused the site and picked up a miscellaneous assortment of "things that will come in handy" to make it worth the postage.
Below is the final grenadier and my two M249 SAWs for the ranger chalk. I also picked up the cameraman and reporter from the Irregular 15mm Riot range as I figure that will come in handy for a few scenarios for Ambush Alley. 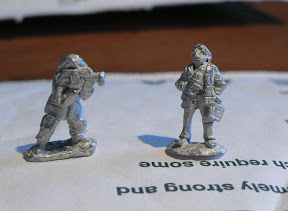 I also needed to pick up some tows for my 5.5" Guns for the 6mm AK47 project, so I got a couple of Matador trucks. These were the original vehicle used to tow these guns in World War II, so I figured they were appropriate. I also grabbed some Recoiless Rifle teams from the Vietnam Range. These should slot nicely into my AK47 armies as an alternative weapon to provide more firepower. 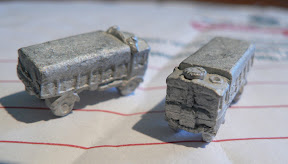 I was keen to try to get some civilians for Ambush Alley, so I ordered the Arab Civilians from Irregular's colonial range. These would probably be really well suited to an Afghan game, but since I've ended up with african militia for Ambush Alley, these really don't fit. Although they will see further life as Pulp figures, especially the bloke in the fez 2nd from left. Due to an ordering mistake I also ended up with 2 Austrian Dragoons (NC121 instead of FZ121). Not sure what I'll do with them, but here they are for completeness. 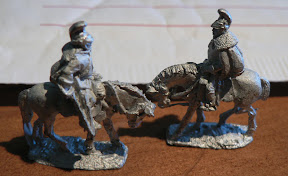 Finally, I wanted to scope out doing Fantasy in 6mm (probably using the Hordes of the Things rules), so I picked up a strip of Dwarf Warriors from the Irregular 6mm range. They're really quite good, but tiny! They're in 6mm AND DWARFS! I also picked up a 6mm Ground Zero Games Mini-Bug. I want to use these as the antagonists in a 15mm sci-fi game. Think Starship Troopers. 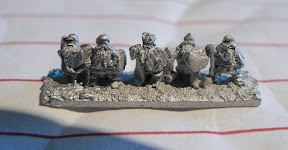 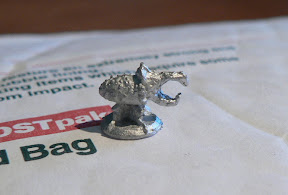 Posted by ScannableGoose at 12:21 No comments:

I've painted up more of the same pose. 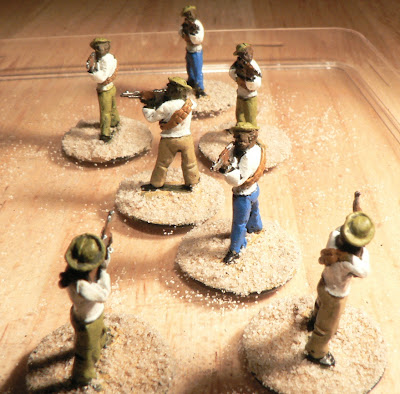 I am reasonably happy with how they are turning out.

I have the additional US figures to complete the ranger chalk now, and I've picked up a camera crew for a future scenario.
I'll post pics later.

The brighter paint on the militia seems to be working out, and I'm now using a different technique on the skin. The hands still don't have enough contrast against everything else, but the faces are working better now.
Time to try the technique on some others now - I think I'll be painting some of the Peter Pig figures next.
Posted by ScannableGoose at 22:14 No comments:

This photo looked okay last night, but in the cold light of day, it's rather substandard. I'm playing around with different techniques for the photography, until I find something that works.
I've used brighter colours on the model on the advice of Eltnot and others. I think that the colour isn't to bad, but it hasn't really fixed my issue with facial contrast. Not sure if it can be fixed..... 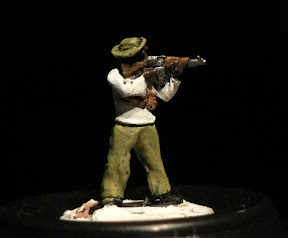 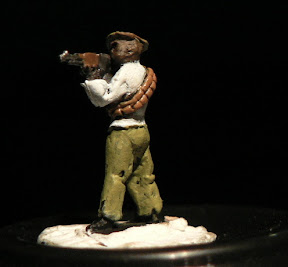 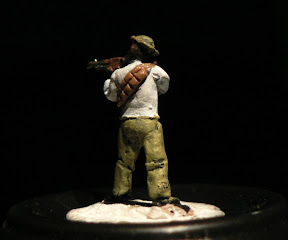 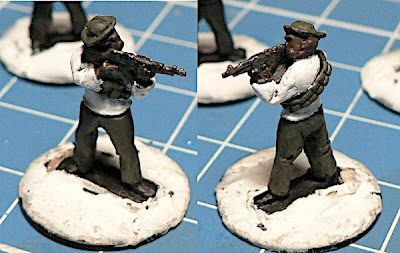 A little rough, but not too bad. Worst part is the flesh - it's difficult to get contrast. Might need a lighter drybrush, but my I'm not sure my feeble painting skills are going to be up to the task.
Posted by ScannableGoose at 19:23 1 comment:

I got in some Flames of War German vehicles from MilSims yesterday.
There were some bikes with sidecars in metal and some resin Kfz15s and Kfz70s that I needed to kit out my 500 point Aufklarungsschwadron.
As I was looking at the models, it occurred to me that the models I have (particularly the bikes and infantry), with the addition of these from Brigade in the US, would make for some rollicking pulp gaming!
I also have some suitable stormtroopers from Eureka that could be used as well.
I'm going to have to hold off until my 6mm AK47 and the Ambush Alley stuff is fully painted, but once that's done, it'll be time to grab your fedora and swing into adventure!