Normally I would shy away from any commitment to a given project in a given year. The demands on my time from work and family are such that hobby time is always difficult to find.
That said, there us one thing I really want to achieve in 2012. The year marks the 30th anniversary of the Falklands / Malvinas War, and I really want to run a couple of games this year that revisit some of the events during the conflict.
Rules will be "We'll have to bloody walk" by TwoFatLardies. Scale will be 6mm. 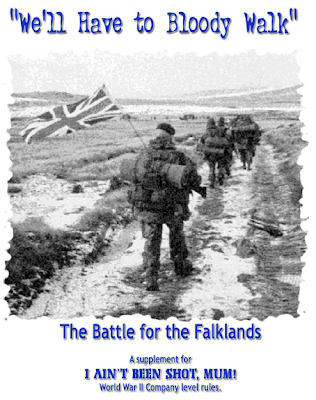 I may also do some of the special forces operations using Force-on-Force.


Focus will be on the land war, but if time and budget allow, this may expand to the sea and air.
More bulletins as events warrant, but I have a lot of reading ahead of me to get properly up to speed...
Posted by ScannableGoose at 18:37 2 comments:

Recently, on a whim, I spent the last of my pocket money for this year on a 2mm Modern Battlepack from Irregular Miniatures.  These are packs with two opposing forces, plus a set of rules.
I wanted to match Brits up against Warsaw Pact in the 1983 timeframe, so Ian from Irregular was very helpful in ensuring that my future BAOR (British Army of the Rhine for the uninitiated) forces were equipped with FV432 and mainly Chieftain tanks (just a couple of Challengers) rather than the Challengers and Warrior IFVs of later years.
Below is a quick comparison picture I took of some of my 6mm Irregular NVA (painted for my AK47 games) against BAOR mechanised section with their FV432 APC.

As you can see, these are tiny figures, but they create a real glee in me.  I can't help but smile when I pick them up and look at them.
The infantry section comes in a single long strip with 8 figures, but a pair of side cutters very quickly gave me two groups to provide more variety for basing.

Painting will be the trick; I'm hoping to give that a go some time this week.
I also have a conundrum on whether to pursue 2mm or 3mm - more on than later....
Hobby time has been very short over the last few months as we prepare for the arrival of our second child next week.
I'm not going to fool myself that I'll have a wealth of time available after number two arrives.....
Posted by ScannableGoose at 10:30 No comments: