More Grist for the Falklands Mill 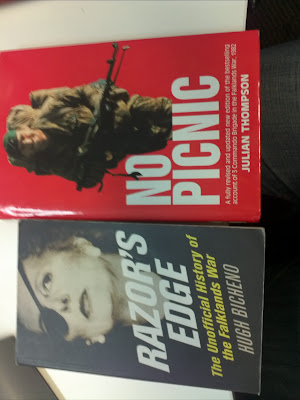 Posted by ScannableGoose at 11:23 4 comments:

The Battle for the Falklands - a Quick Review

Last night on the train home I finished reading "The Battle for the Falklands" by Max Hastings and Simon Jenkins.  I thought I'd put down a few quick words on my thoughts on the book.  I hope to do this with all of the books in my Falklands Reading List this year. 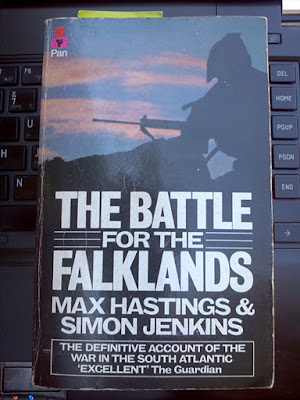 First an admission is necessary; this is the first book on my Falklands Reading List, so I really have nothing to compare it with.  This claimed by many to be the standard reference work, so I thought I'd start with it.  Future reviews of other books will obviously contain comparisons where appropriate.

I read a 1983 paperback version of the book, 448 pages (although only about 380 of these are the meat of the book), with 16 pages of black and white photos and 8 pages of maps.  In addition to the the text, maps and photos, the book contains a chronology of political and military events, a glossary of terms, a list of british decorations (both civil and military) and an interesting section outlining the ships, men and aircraft of the taskforce.  Excerpts from the "Franks Report" which was the official government report into the Falklands conflict are also presented at the end of the book, to enable the reader to compare and contrast the official findings with those presented by the authors.  A full index is also included.
Max Hastings was a journalist who accompanied the task force to the South Atlantic and appears to have a fair bit of experience reporting military matters.  Simon Jenkins was the political editor of the Economist, and so had access to many sources in Whitehall.  In the text, Jenkins covers what was happening in the UK, Argentina and the US, whilst Hastings covers the progress of the task force and the conflict "on the ground" in the Falklands.
The first point I feel I need to make here is that this is a history book rather than military war story.  The authors have done an excellent job tracing the cause of the 1982 war from the original discovery of the islands, through the various claims and occupations of the islands through to the failures of diplomacy that lead to the war. In fact, the actual Argentine invasion does not occur until more than 90 pages into the book!
There is a lot of material on the actions of the Foreign Office in negotiating with Argentina over the future of the islands, and also decisions by Defence that lead to some of the materiel issues faced by the task force.
I found some of this early material difficult to read, paricularly keeping straight in my head the revolving door of ministers and secretaries working on the negotiations.  This did however contribute to the point that the text was trying to make that continuity of office was a big contributor to the issues with the dicsussions over the islands.
The narrative of the naval battles and then the land campaign is quite good.  There is some detail on Goose Green and also the battles for Stanley as 3 Commando Brigade and 5 Brigade advanced over the mountains, although obviously a book of this size and scope cannot provide infinitesmal detail on these military actions.  Some good overview maps are provided for Goose Green and the approach to Stanley, which helped to cement things in my mind.
The book is (of necessity I think) anglo-centric, although the authors appear to have attempted where possible to use Argentinian sources.  Quotes from Argentine politicians and soldiers appear throughout, but deep analysis of Argentine actions is not possible from these.  This appears to be a more general problem with Falklands texts (at least those in English) as access to Argentine sources appears to be difficult.
Overall the book provides a very good overview of the actual conflict and has enabled me to lay out in my mind what happened where and when. This has given me a great start in working out what to read next and I also now have some good ideas for actions to bring to the table top.


I would recommend this book.  It doesn't have a lot of nitty-gritty detail on the military actions, but there is enough to give you a good overview and steer you in the direction of more detailed accounts.  It is, however, an excellent analysis of the conditions that lead to the two nations facing off over a tiny spec of land in the South Atlantic and a record of how that played out.
Posted by ScannableGoose at 09:47 No comments:

Not a lot of obvious progress on the Falklands project over the last ten days or so, but I assure you things are progressing!
I've been reading "The Battle for the Falklands" by Max Hastings and Simon Jennings.  It's been a difficult read at times with my current levels of sleep thanks to Abigail and her 2-hourly feeds, but I hope to finish it this week, which should mean a review next week.
We also still have family visiting to meet Abigail, and they all stay in the room where my hobby stuff is stored, so I haven't been able to access it since Christmas.  I'm keen to get some painting done to get my brush-wok back up to scratch for the Falklands Project, and also to try to get some of the other projects languishing on the lead pile moving forward.  I also need to get started on some suitable buildings for the rural Falklands communities that will feature in the early games.
The next book to be targetted is likely to be "Goose Green" by Mark Adkin.  I also have some more books coming to add to the reading pile, particularly some more Argentine-centric reads.
I've also got an initial order in with Heroics and Ros for the figures I'll be using and I'm looking forward to those arriving.

Posted by ScannableGoose at 14:00 No comments:

Found the following book at a local market and picked it up. 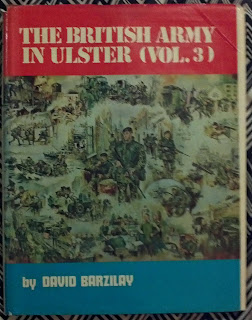 It looks like quite an interesting read.
Essentially its a bit like a diary of events in Northern Ireland from late 1975 to early 1978.
It details units deployed over that period and significant events in more detail.
It's going to have to go on the pile for after the Falklands material, but it looks like a good reference for Northern Ireland during this period, or if you are looking to game an alternate timeline ala Winter of 79.
On the subject of the Falklands reading list, I've started "The Battle for the Falklands" by Max Hastings and Simon Jenkins.  I'm finding the early chapters very interesting, but it is a little heavy going on my current sleep levels.  Good detail on what happened that lead to the conflict over the islands.  Still to get to the actual conflict itself at this point.

Posted by ScannableGoose at 00:05 No comments:

Whilst up late one night before I finished up work last year, I ordered a number of used books on-line relating to the Falklands War.
While I was away, the packages piled up at work, so I actually had a reason to come back to work this year (mortgages and feeding children aside....). 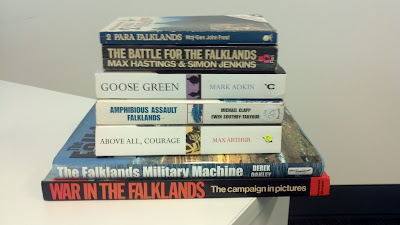 ﻿
Most of these were selected for their relative cheapness more than anything else, although I believe "Goose Green" by Mark Adkin was recommended in one of the TFL Specials.
The two larger format books I ordered because I figured that they would have a number of pictures that would be useful in envisioning men, machines and terrain for the conflict (I was only 5 when the war took place).  Having a quick skim, this certainly appears to be the case.
There are a few more books that I would like to get, including "No Picnic" by Julian Thompson, but I'm going to have to wait until I can save some more money.
Keen for any recommendations that others may have on this, particularly for good texts presenting the Argentinian perspective.

I also picked up a couple more Don Featherstone books (Battle Notes for Wargamers and the Victorian Colonial Warfare book on India), as I've been quitely collecting many of his books over the last 6 months.

Now to sneak them home without my wife noticing........

Posted by ScannableGoose at 07:00 7 comments:

First Post for the new year, and it's actually a catch-up on the big event from just before Christmas.

Things have been pretty quiet here on the blog for a number of months now, mainly due my pre-occupation with the preparations for the arrival of our second daughter.  I had a lot of work to do renovating our bedrooms to make room for the new addition, that was only just finished in time. 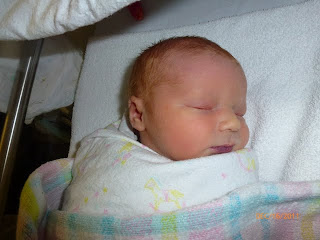 On the 15th of December, Abigail was born and since then I've had even less time for the hobby between my family visiting for Christmas and adjusting to a new member of our immediate family.
I'm back at work now and imbued with the spirit of the new year ahead, I'm hoping to post more frequently, particulary since I've now gone and committed to getting my Falklands project done this year!
More on that soon.....
Posted by ScannableGoose at 14:20 7 comments: