Well I finally got those trucks finished, and here are the battlegroup on parade.

I'm not at home; so I'm only shooting in the light of the dining room, but the new approach to the manual settings seems to really be bearing fruit with depth of field.
Here are some more shots.

Today I have also undercoated the modern US, afghans, and VC from the previous order, along with the Centurion tank, Greyhound and Panhard armoured cars.  Hopefully I'll get some paint on them soon!
Posted by ScannableGoose at 19:01 No comments:

I've finally finished all of the infantry for the army of the Loyalist Officers of Zumsia.

The only items left to be painted are the trucks in the background of the picture.
It will be good to have them all done.
I'll be putting up full battlegroup photos once their done.  Hopefully there will be a lot more time for painting and modelling over the christmas break.
Posted by ScannableGoose at 08:00 No comments:

check out this little project where someone has combined an old soldering iron and an x-acto blade to make a "hot knife".
Here is the link.
I can see a number of applications for cutting plastic for bases and modelling, and also for cutting and shaping foam.  Maybe some interchangeable tools?
I also have an underpowered soldering iron downstairs......
Posted by ScannableGoose at 16:21 No comments:

I've been pretty busy the last few weeks with non-gaming things, so I haven't got any more progress shots to show at the moment.
I have, however, been researching a few things and trying to pull together content for TPLC.
Recently I came across a very good article about photographing miniatures.
Check it out at : http://www.hodgenet.co.uk/minpics/index.htm
I've been doing it all wrong!  I'd arrived at settings just by playing with the manual exposure settings on the camera without knowing what I was doing.  As a result, the light at my disposal that first time shooting dictated my aperture and exposure settings.
My aperture settings were set too wide, hence the depth of field issues I was getting on the massed battlegroup shots.  I've just tried setting the aperture smaller on some work in progress, and it does sort out the depth of field issue. 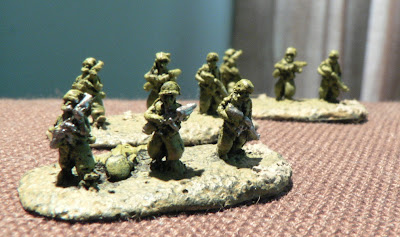 The only problem now is that with such a small aperture, my exposure time blows out to 1/4 sec which means my shaky hands cause issues.  I think with better light sources, plus a tripod and timer settings, this could start to work.
The only problem is that now I won't be able to hide my dodgy painting behind blurry photography!
Posted by ScannableGoose at 16:07 No comments:

Managed to run another game of Ambush Alley over the weekend.
Two players with myself as the umpire. We played the "Contracting Trouble" scenario from the core rules. We didn't finish the game, as it was already quite late by the time we started, but the guys seemed to enjoy the experience. The marines managed to get the contractors off the board, but the majority of the marine force was still trapped on two rooftops as the contractors exited.
Some quick shots from the game are below. I forgot to take the good camera, so these are just quick shots with the camera in my phone.
The marines were advancing up the main thoroughfare to get to the contractors, when..... 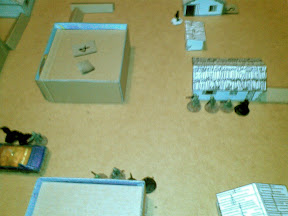 The reinforcement roll for the Insurgent player turns nasty for the Regular player as 14 insurgents (2 with support weapons) suddenly appear on the roof overlooking the contractor vehicle. 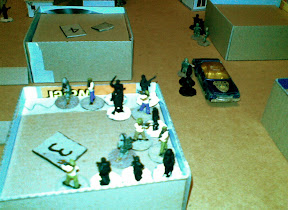 I actually ran out of figures when this occurred so two of the insurgents are actually marine figures.
Unfortunately for the insurgent player, his next firing dice looked like this (4+ is a success): 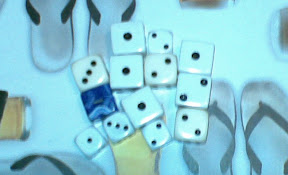 Despite the poor rolling, within a turn both marine fire teams had been forced to retreat to the cover of the buildings to tend to their wounded. 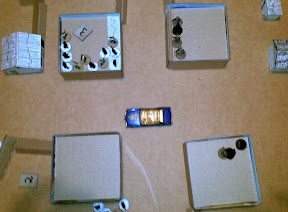 However, with all of the fire being directed at the marines further down the road, the squad leader was able to usher the contractors to safety, narrowly missing an ambush laid by two insurgents at the head of the road. 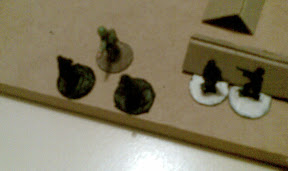 Posted by ScannableGoose at 23:05 No comments:

I'm starting a new blog for "in-character"information about the two forces for my 6mm AK47 games:
The intent will be to document information about the fictional country of Zumsia and the conflict, including geography and history, orders of battle and "frontline reporting" (game after action reports).
I hope to have a bit of fun with it!
Tiny Metal Men is going to remain the miniatures blog and I'm hoping to keep regular updates going for both.
Posted by ScannableGoose at 23:24 No comments:

Part of the fun of AK47 is rolling for the force names and coming up with wacky interpretations of the words that you roll.
I had originally named my forces, but I've been looking at them again and I think I can do better.

At the moment my PPF Force is Ztumre National Workers Intervention, which is just the words themselves, and roughly in the order they were rolled. This abbreviates to ZNWI. Boring! So I've looked at the letters and come up with WINZ - The Workers Intervention for the Nation of Ztumre. Better I think.

Likewise the Colonials are currently ZISR - Zumsia Intervention Sword of Resistance. Not too bad - it's a difficult collection of words. Looking at the letters I came up with :

I think SIRZ is pretty good for an abbreviation for a Colonial army, but I'm stuggling with exactly how to string the words together in a meanigful way. From that perspective, ZIRS is the best option from my view. The Intervention Resistance bit suggests that it's countering the Workers Intervention, and Sword could be an organisational thing (like a batttlegroup?). Maybe I'm overthinking?

Let me know what you think.

And for more AK47 Republic naming fun, check out the excellent Ztum Setum site. I'm pretty sure they didn't roll those up, but what's the point of rules if you can't tweak them?

Also, note that I've enabled reactions at the bottom of the posts now. Tick a box to let me know what you think of any of my posts.
Posted by ScannableGoose at 13:39 4 comments:

I'm back on the painting wagon again and managed to push out some of the Zumsia Intervention Sword of Resistance troops. I've painted up 3 command stands and 6 infantry stands. The only thing left to complete the two Regular units is the Mortar and Grenadier stands.

I was in a hurry with the pics and it appears that there may have been a hair on the lens, but you get the general idea!
Posted by ScannableGoose at 23:06 5 comments:

Final segment on my latest Eureka order.
I picked up some items from the 6mm civilian Range.
First up the Bazaar 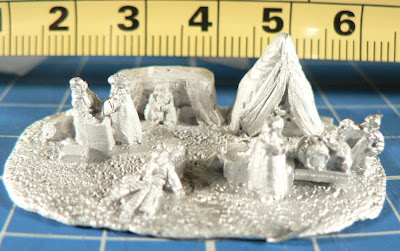 I got this to use as a size reference for terrain and I also figured it slotted in well with a few scenarios I had in mind.

Secondly I picked up the 20th Century Civilians 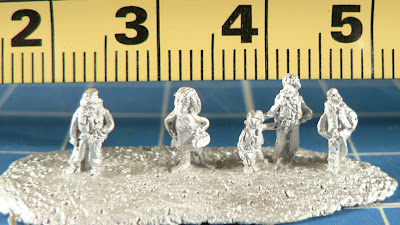 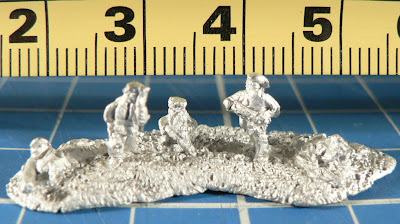 These were destined for AK47, and will probably be used to spruce up command stands.

Finally, just to mix it up a little, I also picked up another miniature from the GZG 6mm range (Dirtside). This time it's a PkZ VII Sturmkampfer infantry walker (apparently). 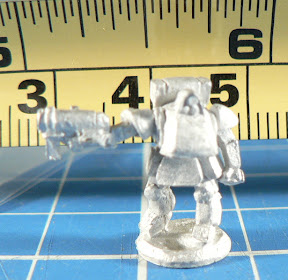 Posted by ScannableGoose at 08:00 2 comments:

I also picked up a number of other moderns as part of the order.
First up I got some some modern british infantry. I wanted to see whether they were closer to the 1980s equipment, or more modern. The 80s format would have been usable for Falklands. I think these are actually 1990+, but as with most 6mm, the paint job should be able to convert between the two. I also picked up a Scorpion which could also be used as a Scimitar of the Blues and Royals on Falklands by minor modifications to the gun.

I also picked up some Afghan Infantry for possible future Afghanistan scenarios. The pictures on these don't really show up too well. I think they should paint up okay.

Finally, I also picked up some generic infantry in bush hats. These will probably get use in AK47.

Depending on how they paint I might use these or the Vietnam Australians as SEALs to crew the Heroics and Ros FAVs.
Posted by ScannableGoose at 08:00 No comments:

I ordered some Modern US to go with the HWMMVs and FAVs that I got last month.
Here are the US Infantry - I got 2 items for a total of 6 bases.

I also picked up a pack each of :
HMGs

Pegasus Bridge has always held a fascination for me, so when purchasing a sample of Allied troops to take on the Germans, it had to be British Paras.
Once again single base per code.
Paras Advancing and HQ

And in keeping with the D-Day theme, I picked up some engineers with mine sweepers and also a flame thrower.

I think the flame thrower model should end up quite good!
Posted by ScannableGoose at 09:00 2 comments:

I'm keen to do World War 2 gaming in 6mm. Once again there's a plethora of rules out there. I already have Flames of War so that was going to be my starting point.
I'd like to start with some Late War Western Front scenarios, so I picked up a sample of German bases from the Irregular range.
Just one base of each as, unlike the moderns and vietnam ranges, these are a single strip per code. I think the standard of modelling is a little better vs. some of the moderns.
Infantry Advancing and HQ/Observers

To accompany the VC and also because I thought they would slot in well into AK47, I also picked up a range of US and other bases that I didn't already have. At the moment I have a selection of the US/ARVN types in use for the Colonial AK47 army.
So what did I end up with?
US Green Berets

Montagnards - not sure about these. They're all in cover. See how they paint up.

Australians (or French or US) in Boonie Hats - nice looking figures.

Patrol Boat - I'm keen to have this involved in some AK47 games as well as Vietnam. 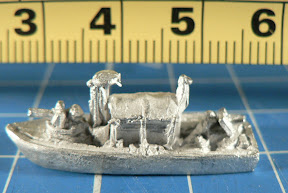 Huey - here are all the bits straightened out (but not trimmed yet). The feet for the skids are missing on the far side, so I'll need to glue a bit of sprue in place to match the side you can see. I believe the little lump on the left of the picture is one of the broken feet. 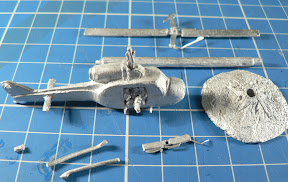 Panhard Armoured Car - Not really Vietnam related. I'm uncertain if the French used these in the French Indochina War. I'll need to check it out! Perfect for AK47. 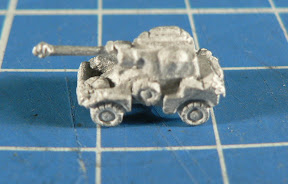 I picked up one of each of the Viet Cong types from the Irregular range. I currently am using the NVA with some repainting as part of my AK47 PPF army. The photos below show 2 bases (front and back), but there are actually 3 bases per pack.
The items below are the VC infantry advancing and firing, and VC cyclists with supplies.

I have the Peter Pig Men of Company B rules that I'd like to have a crack at. I know there are plenty of other options floating around - I'll welcome any recommendations!
Posted by ScannableGoose at 21:11 No comments:

I've started going through my most recent order of 6mm Irregular Miniatures from Eureka Miniatures here in Australia. For the first batch of photos, here are the fantasy bases that I ordered. 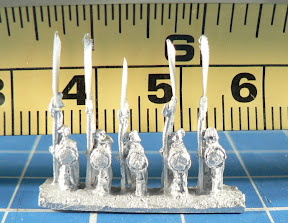 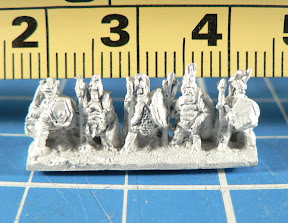 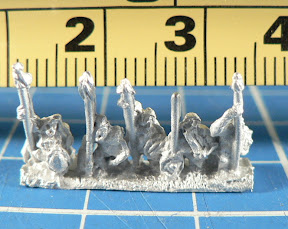 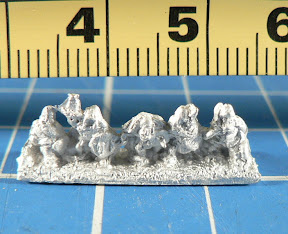 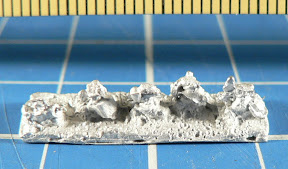 These don't look like much in the pictures, but the lighting has washed out some of the detail.  A bit of paint should lift the detail out.
That said, I don't think that they look quite as detailed as the dwarf sample I purchased earlier.
Posted by ScannableGoose at 20:37 No comments: