As promised, here are some pics of the Flashpoint Insurgent figures.
They are also great quality casts.
Just like the Rangers, they're pewter, rather than the traditional lead-heavy alloys, which makes for a very crisp result. 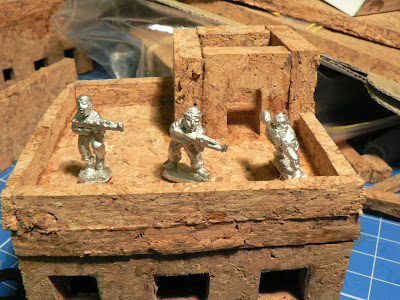 Here are some pics of the indivdual poses I received in my pack:

RPGs are at either end, with the RPD second from right.
I'm not sure that this picture does them justice. The light and the angle has washed out a lot of the detail.
The figure second from left that looks like he has a mess for a head is actually quite a detailed model of a man with a beard who is looking up.
The dude who looks bald in the middle is actually wearing a bandanna around his head.
Once I get some paint on them, I think it will be a lot more obvious!

And here is the size comparison pic:

Just like the one for the FP Rangers, we have Peter Pig, Cannon Fodder, and Irregular.
Posted by ScannableGoose at 07:00 2 comments: