More detailed shots of codes from the Heroics and Ros Ancient and Dark Ages ranges that I picked up to play TooFatLardies' "Dux Britanniarum" in 6mm.  Click on the images for larger versions.

MA17 - Ancient British Infantry:
Two types of strip in this code:
A command strip with leader, standard and horn blower. 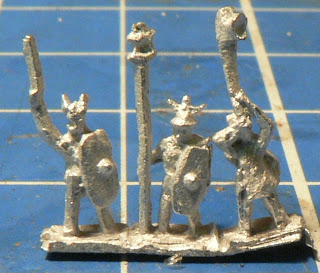 And the infantry strip proper

I don't think this code will get a lot of use for Britons vs. Saxons, but I suspect I will be using some of the figures for Picts or Scotii. 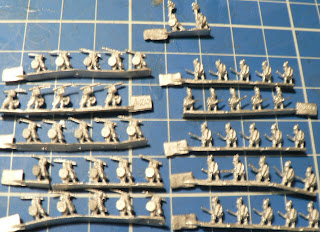 One Command strip and seven infantry strips in the code. 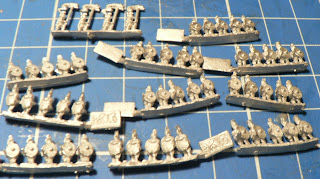 One strip of standard bearers and 10 infantry strips per code.  Detailed pics of the individual strips below:
Standard Bearers 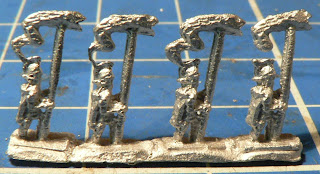 Infantry - these are armed with a sword (gladius?) and a shield.

One strip with two standard bearers and 10 strips of infantry consisting of 5 strips each of two types.
Detailed pics below:
Standard Bearers 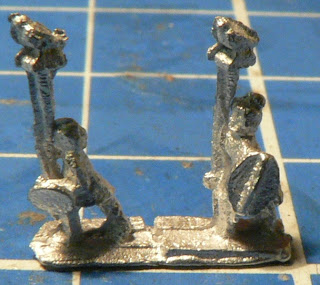 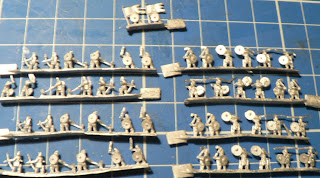 One Command strip, and four each of two different types of infantry strips per code.
Lots of good stuff in this code, detailed pics below:
Standard Bearers 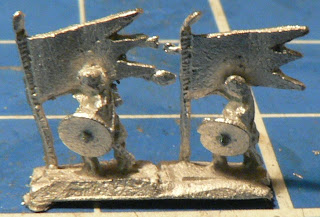 Infantry Strip Type 2 - Axes, swords and spears/javelins with round shields.

Two-Wheeled Bullock Cart - this comes with a cover

Bullocks and Driver - note the yokes around the necks to match up against the carts.

Pack Mules and Drivers - useful for just about every period.

Posted by ScannableGoose at 21:51 No comments: 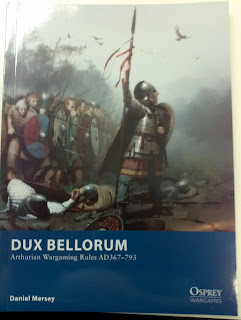 My copy of Daniel Mersey's new Arthurian game for Osprey Publishing, "Dux Bellorum", just turned up today.
Primarily I bought this publication because I am very new to this period and I thought an Osprey publication would be useful for artwork and examples.  TooFatLardies's Dux Britanniarum appears to be a good set of rules, but most of the images are diagrams to explain the rules.  I felt that Dux Bellorum would be likely to have more pictures of models and artwork from Osprey books.

Posted by ScannableGoose at 13:22 No comments:

The order of figures from Heroics and Ros for the Micro-Dux project turned up last week.  However life being what it is, last night was the first time I had a chance to get them out of the bag and start to have a look.
Pictures from four of the promising codes are below.  Click to enlarge.

MAR11 - Heavy Roman Cavalry
There are essentially two different types of strip in this code.
the first has a lone standard bearer figure. 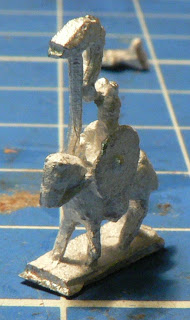 The second is the actual cavalry strip; 3 horse per strip.

You get 7 calvary strips (and the standard bearer) per code. 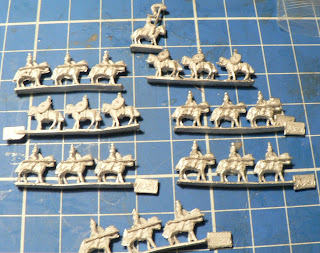 MAR28 - Late Roman Light Infantry
In this code there are again two strip types.  This time you get one command strip with standards and commanders, and then 10 strips of five figures of infantry.  There are two infantry poses, three of one, two of the other per strip. 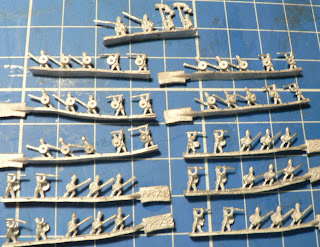 Detailed photos of the two strip types below:

MD4 - Saxon Fyrd
In this code there are four strip types; Command , plus three infantry types.  The Command Strip has three commanders and two standards.  There are infantry with a sword and round shield, spear and a round shield, and infantry marching with a kite shield on their backs and a spear over their shoulders. Detailed pics of the individual strip types below:
Command Strip

Sword and round shield

MCR11 - Welsh Infantry
Actually from the medieval period range, but as you will see below, some useful figures...
First up, the command strip; commander, musician and standard. 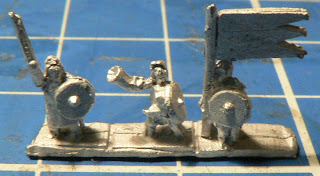 One Command Strip and ten infantry strips per code. 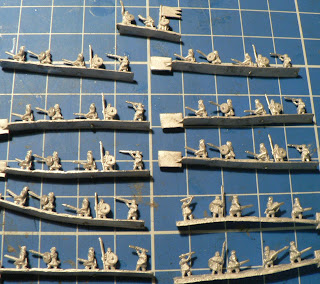 My copy of Dux Britannarium arrived at work today.
Very nice production indeed.
Book is very nicely put together and the cards in their case are excellent.
Below is a pic of where I've put the map up at my desk at work. 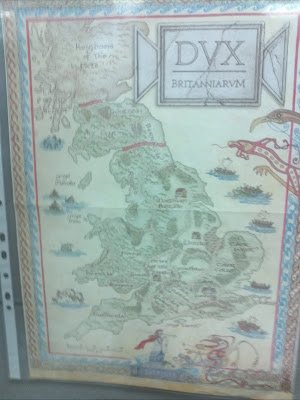 Posted by ScannableGoose at 16:47 2 comments:

I received my tablet version of the TooFatLardies Dux Britanniarum rules earlier in the week, and finished have a good read through them this morning.
Looks like a bit of fun!
As a result I'm kick off a project I'm codenaming MicroDux, which will be Dux Brit in 6mm.
My original intention had been to try out some figures from Baccus 6mm, but I discovered I had incorrectly added up the costs of that solution and I don't think it's going to be workable from a budget perspective.
Given that I'm going to be ordering the final few bits for my Argentines from H&R later this month, I figure I might just try out a number of their ancients codes.
Posted by ScannableGoose at 23:35 3 comments: