Time for more Irregular figures that could be useful for MicroDux.  As always, click on the image for a larger version.

You get the two bases per code.  These will be getting a spot as my Romano British Command figures.

Next up a range of skirmishing troops.  I will be using these for my missile troops for MicroDux.  The pics below are pretty self-explanatory.  One strip per code.
E17 - Barbarian Infantry Archers

Next, more from the Irregular Roman range.....

Posted by ScannableGoose at 23:48 No comments:

I recently placed an order with Ian at Irregular for a range of figures for a number of projects I have planned. I have always liked Irregular's range, but their fixed basing can sometimes prove problematic. Below are a few picks from their Dark Ages range.

DA35 - Barbarian Foot Generals
Two stands per code. I think these will be quite useful. 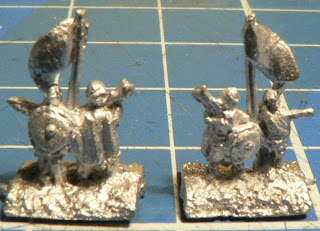 DA27 -Varangian/Saxon/Russian heavy axemen
Not bad figures, but the "close" basing makes them unsuitable for re-basing.

DA27 - Saxon Spearmen
Again, quite nice figures, but the close basing makes them unsuitable for my Dux Brit project.

The size of some of the Irregular ranges can vary range to range. It looks like the Irregular Dark Ages stuff is a good match against the Heroics and Rose figures. Here's a quick comparison between the Irregular Barbarian Generals and one of the H&R MD4 Saxon Fyrd strips: 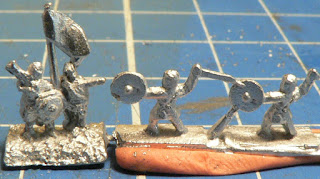 Posted by ScannableGoose at 14:27 No comments:

Even more figures for MicroDux

I recently just got anther order of figures from Heroics and Ros.  For the most part, these are for other projects, but there were two codes I ordered specifically for MicroDux.

MAR10 - Late Roman Legionaries
I picked up this code, because I really wanted spear-equipped troops for my elite companion infantry, rather than the sword-equipped figures shown previously.  This code has delivered as you can see below.
Front and Back of the main infantry strip. 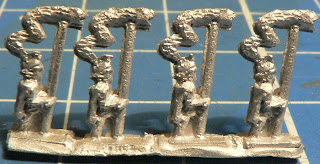 One standard bearer strip and 10 infantry strips per code. 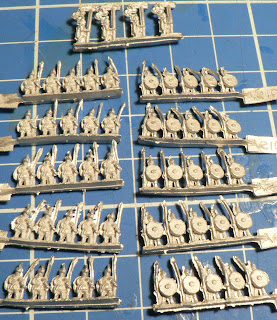 MAC10 - Celtic Cavalry
I picked up this code, because I've been trying to find a suitable code for light spear-equipped cavalry. I don't believe I've found that here.
One standard bearer and 7 cavalry strips per code. 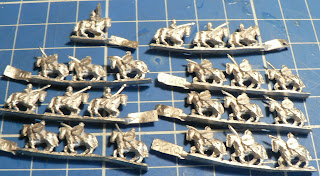 Detail of the standard bearer strip 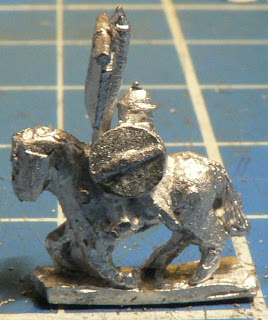 Detail of the cavalry strip

Coming up .... Irregular Miniatures figures for MicroDux
Posted by ScannableGoose at 21:23 7 comments:

So here is the current final installment from my last order of figures from H&R.  I have some more H&R stuff  coming in the mail, and also plan to pick up some Irregular figures later this month to see how well they fit together, as I like both ranges.
In this installment there are a number of ranges like the Huscarls that with their kite shields are not suitable for the "Dux period".  These will go into storage for some future later Dark Age project.

On with the show!
Click the images for a larger version. 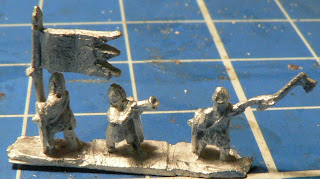 The code consists of the command strip plus ten of the infantry strips. 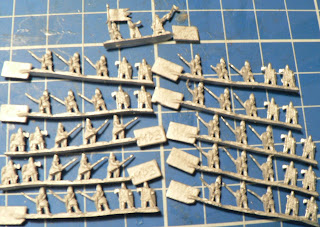 MA12 - Visigoth Infantry
Another code that really doesn't fit will with the current project.  I picked it up taking a punt on barbarian-type codes.
Single command strip consisting of two standard bearers, plus ten five-man infantry strips. 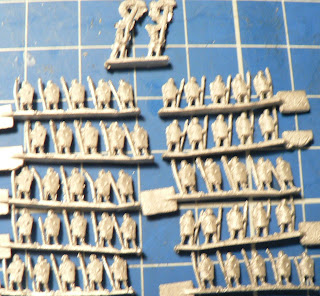 Detail on the standard bearers: 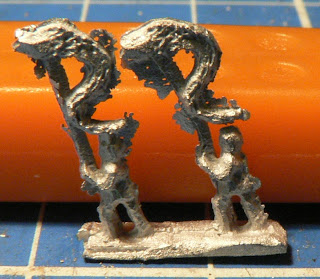 They obviously need a little flash removed.
And the infantry strip:

I'm not particularly familiar with the Visigoths, but this almost looks earlier roman in style? 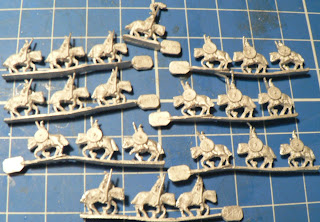 Detail on the standard bearer: 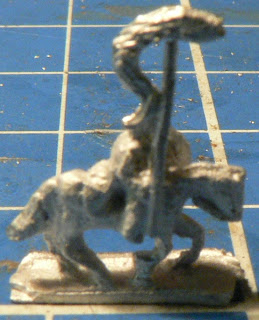 Detail on the cavalry:

This code may find a place in my Dux forces yet.

MD54 - Heimskringla Longship Command pack.
These are interesting figures.  As you can see from the detailed figures below, they don't have bases as they are designed to be mounted in the Heimskringla range of ships.  They are nice figures but are larger than standard Heroics and Ros (more on that later).
The bag of MD54 that I received had two each of the poses below:

MD53 - Saga Warrior Crew Pack
The other figure set from the Heimskringla range.
I received 21 figures from 4 unique sculpts as per below. 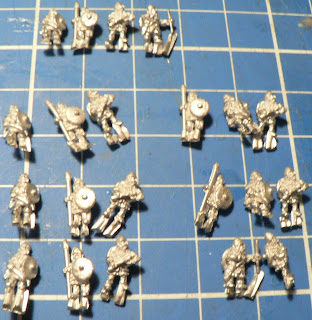 Detail of the 4 sculpts.

As you can see, the Heimskringla are a lot bigger by comparison. I assume they probably come close to some of the larger 6mm ranges however.  Due to the size difference, I won't have a lot of use for these figures, but I may use one of two as champion figures for my Saxon forces.