I've been a bit behind on my Meeples and Miniatures podcast listening, so I've put the last few on my ipod as I walked the dog this week.
Last night it was Episode 62 wherein Flying Lead from Ganesha Games was discussed. 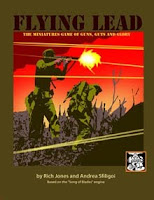 I must say I was quite interested. I've never played any of the "Songs of" games, although I've been aware of their existence. The promise of a complete game within an hour or a campaign within an evening is very tempting for my tight schedule. Also I've been looking for something light and simple to lure others to their unsuspecting doom of getting hooked on historical wargaming.

And at $8.53 for the rules, it's very tempting...
Plus it would lead Eltnot to once again accuse me of a lack of focus!!!

I'd definitely recommend listening to the podcast and the opinions therein.

So what do you think? Have you played any of the "Song of" rules? Are they a good solution for a quick, fun night's gaming?
Let me know in the comments.

As part of the deal for getting the hallway finished, I took advantage of the ongoing strength of the AU$ vs the pound and picked up some of the fine Too Fat Lardies publications.
Here's what I have waiting for me AFTER the hallway is finished:

I also picked up the 2009 Christmas and Summer Specials. Included is the picture is my copy of Ambush Valley that I finally got around to binding at the same time. 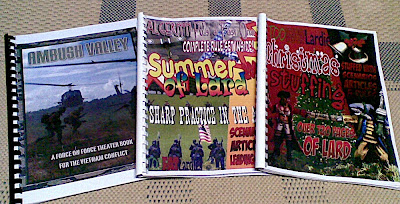 Through the week I'll be binding some other PDFs that I have. Unfortunately my copy of Force-on-Force will have to wait as it's sealed up in the bedroom with the renovations.
Posted by ScannableGoose at 18:49 No comments:

If you want to see some amazing 15mm, go check out this blog:
http://15mmfun.blogspot.com/
Compare his QRF humvees here.
To mine here.

Some great ideas there I need to borrow / steal!
Posted by ScannableGoose at 06:11 4 comments:

When the Navy Walked Preview

ArmChairGeneral has released the free preview of his forthcoming Victorian Science Fiction Rules - "When the Navy Walked on Rorke's Drift".
Go check them out!
Posted by ScannableGoose at 12:44 4 comments:

I've just quickly thrown together a quick comparison of the relative sizes of a QRF ACAV and a Peter Pig M113 that I had in the cupboard.
The comparison is intended to be on size rather than the quality of the model, as the Peter Pig has been cleaned up and undercoated, whereas the QRF has been tipped out of the bag where it's languished for the past year of two and then clumped together with Blutack.
The QRF is also missing its headlights and the driver's hatch that I didn't blutack on (it DOES say QUICK comparison!)
So without further ado, here are the pics (hi-res if you click). I'll leave you to make your own judgements on compatibility. 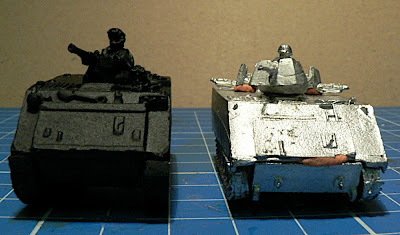 Posted by ScannableGoose at 21:40 3 comments:

My order from Maelstrom just turned up in the mail. 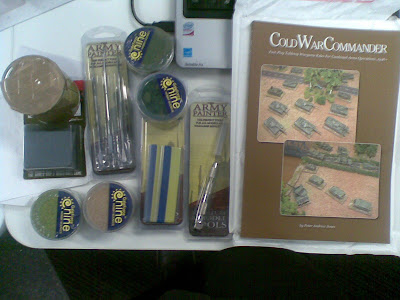 It was sent on Thursday just before Easter and arrived here (via our mail section) on Wed Morning. That's impressive!
The tin of Quickshade got dinted, but it was securely taped up and there haven't been any leaks.
Lunchtime should see a quick perusal of the CWC rules.
Looking forward to getting it all home tonight.
Posted by ScannableGoose at 10:47 No comments:

I thought I'd have crack at making some bamboo huts for south east asian games.
Here is where it is at, at the moment. 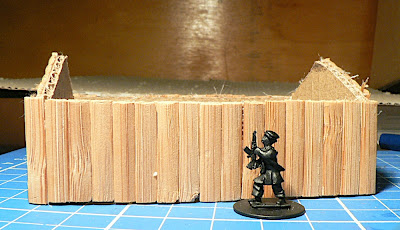 I know the CannonFodder figure is quite out of place, but I couldn't find any on my VC in a hurry.

I made a rough cardboard frame and then covered it with a cut-up bamboo placemat. 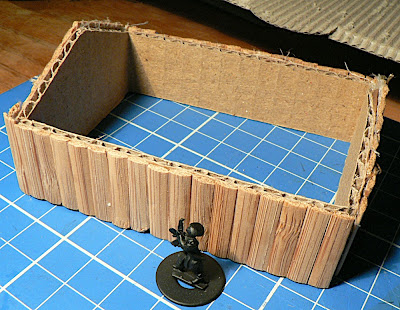 After fiddling with hobby knives and other cutting devices, I went out to the shed and grabbed the secateurs. Definitely the way to go for cutting up the placemat. 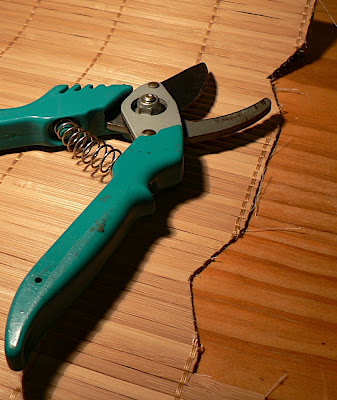 I haven't put in any doors or windows yet, so I think the secateurs will be called out again. I guess I probably should have put them in before I put the placemat onto the frame....

I'm uncertain on what to use for roofing materials. Should I thatch it, or use a corrugated iron roof? Do a number of both? 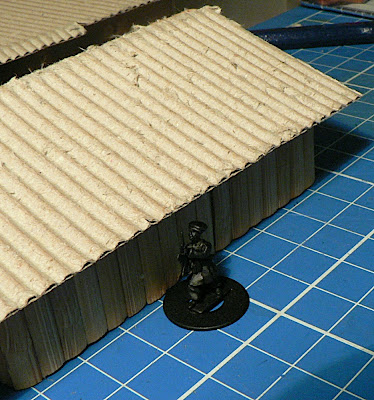 Anyone have any suggestions on the roofing material decision?
Posted by ScannableGoose at 21:46 4 comments:

What did I achieve over Easter?

Not a lot really.....
On the modelling/gaming front at least.  On the gyprocking and plastering side, there was good progress.  But this is Tiny Metal Men, not Renovating for Nutcases!

I have started on a bamboo shack that I hope to get some work in progress of pics tonight.  My order from Maelstrom has shipped, so I'm looking forward to that arriving so that I can forge ahead on my Flashpoint Vietnam figures.

I did get in a few minutes of reading and finished off Target Basra about the Royal Marine Commandos in the invasion of Iraq.  Some interesting scenarios there that could work for Force-on-Force.

On the train in to work today I've started on 3 Commando Brigade about the Royal Marines in Afghanistan.
After that is Ground Truth which is the follow up to 3 Para (which I thought was a good read).  I picked up all three of these (Basra, 3 Commando and Ground Truth) for $25 from my local QBD.

On the gaming news side of things, TooFatLardies released their Operation Compass scenario pack providing:

An extensive history of the Italian invasion of Egypt and the British response: Operation Compass, the Five-Day Raid that turned into a campaign. Set between June 1940 and early February 1941, the booklet contains twenty-three unique scenarios for “I Ain’t Been Shot, Mum!” including attacks, counter-attacks, encounter battles, desperate defences, and the types of action typical of desert warfare: tank vs tank and tank vs gun battles.


From the 11th Hussars’ initial reconnaissance and harassment missions; through to the assaults on the network of Italian camps in the Western Desert; the Australian assaults on Bardia, Tobruk and Derna; and on to the thrilling climax at Beda Fomm, you’ll encounter British, Australians and Italians of all shapes and sizes.

I'm hoping to pick this up to accompany my current collection of 15mm Battlefront Australians.
Posted by ScannableGoose at 13:27 No comments: