Some better pics of the first attempt to do 6mm DPM for my Falklands UK forces.  Clicking on the pics should give you a larger image.
Here is the half section I've done to date.  The figures are a mix of Heroics and Ros M5-British Infantry (helmets) and M14 Royal Marines (berets).  I've given the beret figures a green beret as I suspect my early games will be Royal Marine Commandos rather than the Paras or the Guards.

I'm very happy with my experiment using scatter to scrim the helmets.  I've done it here as an experiment, but in future I'll only be doing it as the final precursor to sealing the figures with a flat varnish (after the bases are all done).
Probably needs some further experimentation with colour and technique, but overall I'm pretty happy.  The flesh colour I used was too runny, which created issues, particularly with the marine on the left.

I have three more bases to do that have only had the base uniform colour at the moment.  The four bases you see below are the product of mixing one strip each of the two codes (M5 and M14), with two figures firing Carl Gustav or similar put into a bag for later.

Posted by ScannableGoose at 14:02 No comments:

I have been drowned under a wave of work of late, so no further progress on the Reading List, as all of my communiting time is currently spent emailing and writing proposals.
My cable internet has failed the last couple of nights, so while I've been sitting on hold for an hour each night, I put together a couple of infantry bases and have started to play with painting DPM.
Here is a blurry picture of last night's effort, as the SD card for my main camera has given up the ghost and I had to take this with my phone.

More pics soon as my wife just called to say the internet is dead again, so I have another hour on-hold to tech support planned for this evening.....
Posted by ScannableGoose at 14:53 No comments:

I picked up a number of helicopters (and a Pucara) as part of the recent order from Heroics and Ros, but these really need to be assembled to be appreciated, so I'l be putting up some pics of those when I get that done.
Also for the Argentines I picked up a few vehicles.  Because of the soft peat that constitues about 80% of the islands, most vehicles had to stick to the few roads, or risk getting heavily bogged down.
First up FM06 - AML H 90. (click the pics for a larger image)

This is a nice model.  The body and turret are separate pieces.  The Argentines had a number of these landed at Stanley, but they apparently never left the town.  I'm still going to pick up a few for some what-if scenarios, and they are useful for a range of post-WW2 conflicts.

Next we have USM13 - LVTP-7 and US38 - Jeep.
These are nice, single part casts.  The one issue with the single cast approach is that there is a large piece of flash/sprue beneath the gun on the LVTP to enable it to be cast.  I'm uncertain whether to paint it out, or attempt to cut.  Further investigation required... 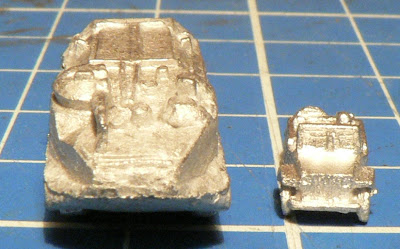 The LVTP's obviously were involved in the original landing, so I'll be using them to game those, and maybe some what-if scenarios as well.


Posted by ScannableGoose at 08:32 No comments:


Today its the Heroics and Ros USR2 - WW2 US Heavy Weapons code.  I picked up a bag of these looking for heavy weapons for my Argentine forces, with the same reasoning that lead me to select USR1 - WW2 US Infantry as a possible option for infantry forces.  Don't forget to click the pictures for larger versions.

First up, the command strip.  It seems that most of the H&R WW2 "weapons" codes includes the ubiquitous command strip.  These consist of two three-man command teams as below, inclusive of radio operators.  Certainly workable for my purposes, but there is a little flash around the second operator from the left.

This is the real reason I picked selected USR2 - WW2 US Heavy Weapons: Bazookas!
Quite a useful strip:
And finally, the MG Strip.

This strip is less useful.  Many of the MGs are obviously older WW2-era models which are unsuitable for the Argentine inventory of MAG MGs and US 0.50cal's.  The MG in the middle is an obvious water-cooled model.  Maybe with some judicious filing?  The final AA MG is useful "straight out of the box", as is the engineer/mine sweeper.

And there you have it.
The crucial item I am missing is 105mm Recoiless Rifles....more on those another day.
Tomorrow : some Argentine vehicles...

Posted by ScannableGoose at 09:25 No comments:

As far as I am aware, no one makes a 6mm Argentine infantry figure, so I was always destined to be substituting and converting figures for these.
I figure that at this scale, the most important thing was to get the head gear about right, which meant figures with the US M1 helmet.
To kick things off, I picked up a pack of USR1 - WW2 US Infantry, as pictured below.

There are five of these strips per code.
To be honest, I'm a little disappointed with these figures, as they lack the animation of the modern UK figures I showed a couple of days ago.
I think I'm going to have to insert some M1 - Modern US Infantry figures that I have from my Vietnam project, to get some battlefield variety.

The only issue here is the packs.  Based on my reading to date, only Argentine special forces had packs, the regular infantry regiments were mainly using kit bags for transport of equipment.
We'll see how it goes.....

Posted by ScannableGoose at 09:26 2 comments:

Next up for the Falklands games are British Support Weapons.
For these I have purchased M6 - British Infantry Support.
The pack consists of 8 strips with three different variations:

Once again, these are quite good and I'm quite happy with them.

My only criticism is the fact that the pack provides 9 Milan teams (3 strips with 3 teams each), but only 2 sustained fire MGs (one each on two strips).
With one pack I have more Milans than I'm likely to ever need for a company-sized engagement, but I'm well short on the SFMG quota.  On that front, I think the pack could be a little better balanced.
Posted by ScannableGoose at 22:35 2 comments:

Last week I received my order from Heroics and Ros which included samples of most of the items I will be using in my Falklands/Malvinas games this year.
I haven't put a brush to any of these yet, I've barely had time to take the photos!
I'll be using two main codes for the British infantry sections:
First up,the M5 - British Infantry. (you should be able to click the image for a larger view)

These consist of seven strips, each one an eight-man section as above.  There are a 4 patrolling figures, one figure patrolling with a GPMG, a section commander and two figures crouching, one with a Carl Gustav or similar.  All wear scrimmed helmets and webbing.  One of the patrolling figures has a pack or section radio.  All in all, these are good figures, although some of the barrels are a bit droopy at the moment.

Next up is the M14 - Royal Marines.  As Andy from H&R described them to me in an email, these are your classic yomping/tabbing pose.  Ten heavily laden infantry wearing berets, per strip, five (5) strips per code.  Again, one figure has the GPMG and another is crouching with a Carl Gustav.

The figures look like they will be equally at home with green berets for the commandos or maroon for the paras.
My plan is to use a mix of the M5 and M14 figures (interspersed) to comprise my British companies.

I reckon these look pretty good.
Posted by ScannableGoose at 08:34 2 comments: 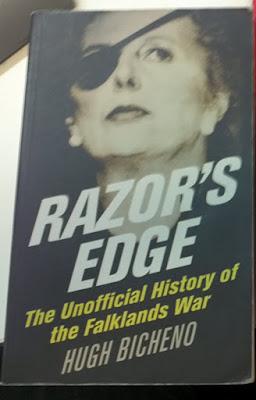 I'm just going to offer some initial thoughts at the moment, as there is a lot of criticism surrounding this book and its accuracy.  I need to read more to fully understand those arguments, so I will refrain from a full review at this time.

I found the book an easy read, but I think part of this is because I already had much of the political background from slogging through Hastings & Jenkins "The Battle for the Falklands".

Bicheno is quite outspoken in his views on the British Public Service and also on the Argentine regime.  In addition, he is highly critical of 5 Brigade command and of "H" Jones.

The book contains a wealth of maps and details of the battles, which appears to make it an invaluable reference for those planning table-top scenarios, but it is this very information which is called into question by some commentators, so until my research is more complete, I won't offer a full recommendation either way at this time.

My next target is Martin Middlebrook's "The Fight for the Malvinas", to try to cement more Argentine information before I focus on more accounts from the British side.

Posted by ScannableGoose at 12:05 No comments:

I've been off sick for the past week or so.  We believe that number one daughter brought the offending bug home from childcare.
I've been too out of it to get much reading done, but I have almost finished Bicheno's book and hope to post some first thoughts on that this weekend.
Back at work again today, and my copy of the "The Fight for the Malvinas" by Martin Middlebrook, and also my initial sampler of figures from Heroics and Ros were waiting for me on my desk! 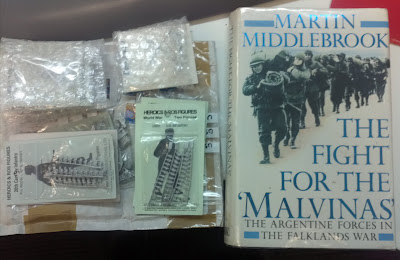 I think I'll be going through this book next, after the Bicheno, as it looks (after the first flick through) like another good overview book.

On the figures front, I picked up a range of the codes to get a sample of the figures and vehicles that will make up the respective forces.  I'll be posting some pics and reviews over the coming weeks.

Now for some bad news.  My original intent with this project was to actually get some games in during the April/May/June timeframe of the actual conflict.  Unfortunately I've overspent my budget on the "Falklands Reading Pile", so it's probably going to be the second half of the year before I can field the full company-plus forces I need for many of the key battles such as Goose Green and the various mountains west of Stanley.  Disappointing, but the current reality.

I'm not planning on stopping though.  I should have enough with this initial purchase to game some of the smaller special forces actions, and probably the combat on South Georgia.  I may also have enough (certainly on the British side) to put together some scenarios for the initial Argentine landings in and around Stanley.

Stay tuned for more bulletins as events warrant....
Posted by ScannableGoose at 18:26 No comments: