I came across this a few days ago:
Take the High Ground
If you've never been there, you should definitely check it out.

This amazing flying boat station has me all fired up about terrain (although I'm sure that the burning will subside before I find time to do anything). 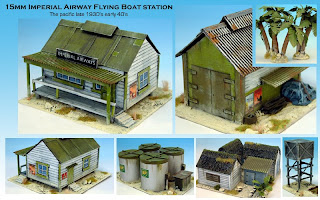 It looks incredible, but he makes it look so easy! I read the descriptions and it all seems so straight forward and simple. Why didn't I think of that? It's all so easy!

I'm sure that when I attempt some of this, things will not go so smoothly......

Posted by ScannableGoose at 09:13 No comments:

I had been having some difficulty filing the thicker bases off the Flashpoint moderns.
My poor little, cheap files weren't up to the task vs. pewter.
On advice from Brevet on the Flashpoint forums, I tried hitting them with a dremel (actually it's a cheap knock-off Dremel).
First-off, I tried using the grinding stones in the kit, but they very quickly became clogged.
Then I tried the Carborundum tips....and they ripped through it beautifully.
A little bit of a rough finish, but then that helps with gluing to the base!
And now for the very blurry pic: 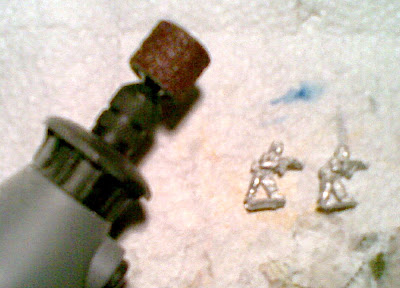 The figure on the left is intact. The figure on the right has been ground down.
The good cameras are out of town with my wife, so it's going to have to be phone camera shots again, until next week.
Posted by ScannableGoose at 01:29 No comments:

I've done a quick revamp on TPLC, and also debuted the new format. Hmmm.....Can it actually be a new format if it's really the first post?

Tiny Metal Men is intended to remain as a "hobby" page with figures, painting and modelling. Tin Pot Little Country will be a narrative page for AARs and other supporting material for my games (when I find time to play any!).
For the near period, TMM will certainly remain the busier site whilst I get through the current pile of figures I need to paint!
Posted by ScannableGoose at 13:12 No comments:

I finished up the glossed Humvees on the weekend.
If it hadn't been for the gloss, I would have done these very differently.
They've ended up looking quite dirty and worn, and this is largely due to my efforts to sort out the gloss, rather than a focused approach to painting wear and tear.
Here are some pics, click them for the full size: 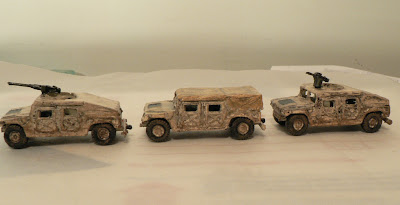 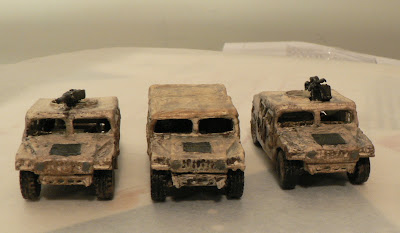 Now, to get back to painting infantry!
Posted by ScannableGoose at 07:28 No comments:

Okay, so I finally sync'd the camera and took some pics of the QRF HMMWVs.
Here are two of them with the unfortunate gloss undercoat. You can see where it's run in around to a lot of the detail. Check out the front wheel of the M2 HMMWV (left). Click on the images for the full size:

I've started trying to paint up an M998 first up. Here's a progress shot from my first Glass Humvee post where I found out that the paint would stick! I've also tried to matt-down the gloss with some paint.

And here's where I had to leave it last night:

It needs some further tidy-up and some inking and dry-brushing, it's starting to get there.
Hopefully finish up tonight, and then it's on to the Mk19 and M2 equipped models.
Posted by ScannableGoose at 09:02 2 comments:

I tried applying some paint to the gloss undercoated Humvees last night.
I painted one of the tires and to my joy it appears to stick!
I think I'll still need to give them a decent coat of clear coat to protect them, but I'm happy that I haven't completely destroyed them. And as it's dried, some of the detail has come back, so things are looking up!
The main cameras at home are full of baby pictures, so I haven't been able to use them. I tried to take some pictures this morning with my phone again, but these have proven to be terrible.
I'll bite the bullet and take some proper shots tonight.
Posted by ScannableGoose at 12:02 No comments:

I had promised myself that I wouldn't by any more books, but I came across these three at my local QBD for about $25 total.

I couldn't help myself. I'd just finished reading "Black Hawk Down", so I splashed out.

I started Horsfall's book (which I'd never heard of before) on the train in to work today, and I've been enjoying it.

QBD is definitely a great source for discounted books!

Posted by ScannableGoose at 11:06 No comments:

Slowly getting back on track.....

Finally had a slower weekend this week and actaully managed to get some hoby-related activity done.


The whole lot got an undercoat yesterday, along with some Peter Pig Vietnam snipers which I'm planning to use as snipers for AA, since no-one seems to make modern US snipers.


Here is the very blurry pic:

I also put together the 3 QRF Miniatures Humvees that I have, but I think I've ruined them with my impatience and the wrong type of paint for undercoat. I accidentally ended up using a Gloss spray, which has run in and filled all of the detail. Also I'm not sure how things are going to go with painting over the top of it. I'm letting it dry properly for a day or two, and I'll see how it holds paint.

Posted by ScannableGoose at 07:45 No comments:

Inspired by Dave's post over at the War Depot, I started to plot out my plans for gaming. At the time when I started this post, I hadn't gotten anything done, subsquently I've actually started moving forward again. I am going to post however, as it puts a good "stake in the ground" to come back and review projects.

Because I'm sneaking these posts in when I can, I'm going to break it down into periods that I'm working on and post them separately. Starting with.....

Moderns
I'm actually working on a number of projects for the post-war/moderns period. This period is my major focus at the moment.

Somali Civil War 1992-1996
This is the period of the UN intervention in Somalia. The current focus is on the period around the events of Operation Gothic Serpent (Blackhawk Down).

Recently I've become more aware of the involvement of 1RAR during the intervention and I'm now keen to game some actions based on their involvement in the conflict. This is currently hampered by a lack of 15mm Australia figures. However Flashpoint Miniatures are promising something soon (apparently around the Christmas timeframe?).

I also have a fair bit of work ahead of my trying to research records and accounts in an attempt to create some realistic scenarios for this.

I the interim, check out the following links for some pictures and narrative of the "Big Blue One" in Somalia:

Australians in Afghanistan 2001 to current
Ambush Alley's Operation Uruzghan book as a starting point.
Stalled on this until someone offers a 15mm modern Australian range.
I have some CannonFodder Afghan figures for use as Taliban.
Also looking at Brits in Afghanistan as well. This is most likely to happen first as I already have a significant number of 15mm modern Brits from QRF and Old Glory.

Iraq War 2003
Ambush Alley is planning on publishing a "Road to Baghdad" book in 2010 (?) and this is likely to be a good source for this.

I already have US moderns, and I have some Bradley's coming for Christmas, along with some troops to use as Iraqi Republican Guard or regular army for early in the conflict. Figures for Fedayeen are available from Rebel, but I don't have any of these yet.

On the subject of Fedayeen, I'm also keen to look at gaming the insurgency as well.

Ambush Alley are releasing Ambush Valley for Christmas 09, and I'm hoping to pick up a copy when I can find some cash in the new year. I already have a number of Vietnam 15mm, courtesy of the old Flashpoint range that I picked up from Drew at Dragonfire. These are packed away for Christmas, and will hopefully getting some attention in the new year.

Flashpoint are also re-doing their Vietnam rules, which are more at the company level, whereas Ambush Valley is more of a platoon sized game. Keen to keep an eye on these as they develop...

No fixed plans here, but I've always been interested in these conflicts.
Eureka also have a great range of figures to work with here.
For Indochina I can probably look to recycle some of my VC as Viet Minh.

This is where my whole interest in the Moderns period started, with the Peter Pig AK47 Republic rules. I'm keen to look at this again. For the bigger games I'm still planning on using 6mm, but my 15mm collection is slowly growing and eventually I should be able to play somewhere between platoon and company level. As I'm reading more and learning more, I'm keen to look at some games based on Rhodesia, Mozambique and others. I'm very keen on some 15mm Rhodesian Fireforce games.

Some others where I'm interested, but haven't got anything firm in mind:

And that's about it!

Posted by ScannableGoose at 11:30 No comments: