As I was prepping my order up for Maelstrom last week, I noticed that they stock 1938 A Very British Civil War.  Coupled with their shipping policy, this represents a bargain for international customers, but I had already committed all of my funds.

For those of you who aren't aware of the this fictional Third English Civil War, it essentially exists in an alternate timeline where Edward VIII refuses to abdicate over Wallis Simpson, and the political turmoil that would have arisen from that decision.
There is a much better summary than what I could provide here.

Here is the TMP post from Solway Crafts and Miniatures for the first book:
http://theminiaturespage.com/news/787475

Definitely something I want to explore in the future.
Yes!  Even more periods to game - exactly what I need!

As a final note, it appears that Maelstrom does math that does not conform to normal worldly arithmetic.  They're still significantly cheaper on a lot of things at the moment due to the strength of the AU$, but I need to follow up with them as to why there is the difference between what I end up with when I total up the costs, vs. the online shop's calculation.  It's probably some error on my part.
Posted by ScannableGoose at 11:01 2 comments:

As part of my birthday haul back in Feb, I managed to pick up some of the old Flashpoint stock that Drew had.  It came in a big baggie and I'd started to sort through it into poses, etc. I took this quick photo (phone camera) of the container that they are sitting in as I headed out the door to work this morning. 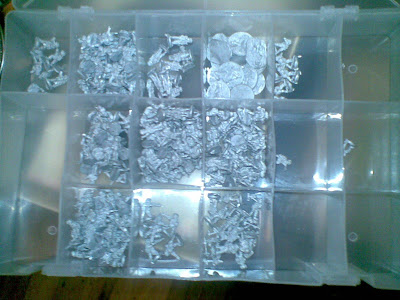 Because it's a bulk bag of old stock, it's not really representative of the product that Flashpoint are putting out now. Some of the figures will need some clean-up due to flash, but becasue there are so many I should be able to get an initial couple of platoons together without having to resort to clean-ups!
They should go nicely with my Marine Corps Helos.
Posted by ScannableGoose at 07:49 No comments:

The family went to a 2nd Birthday party at a park across town today.
The park itself was once used as the facility to store coral that had been dredged from Moreton Bay before it was crushed up and turned into concrete.
They have one of the old crushers there and I took this pic. 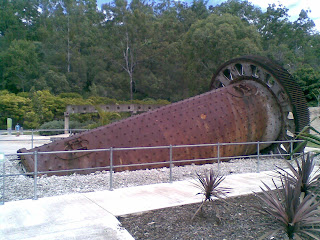 The way that it's buried into the ground made me think of some sort of Victorian Sci-Fi tunneling machine.
It was a massive piece of machinery.
Here's a closer shot along the shaft. 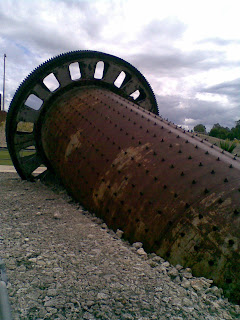 Posted by ScannableGoose at 23:43 No comments:

When I started this blog it was supposed to be a bit about doing this hobby "on the cheap".  Now I find myself buying even more stuff!

This is a little different though as I'm not buying any new figures (I tell myself....) with this birthday cash.  I'm going to get some hobby stuff from Maelstrom thanks to the weaker Pound and their free shipping policy.

Top of the list is going to be some Army Painter "dip".  I'm keen to give this a go, as anything that speeds up my painting will encourage me to get back into tackling the Lead Mountain.  Also I'll be picking up some Flames of War bases for my Flashpoint figures and......for the first time ever...... flock and static grass!  w00t!

I'm also going to pick up a copy of Cold War Commander.  I know at least one reader of this blog who will now be fighting his gag reflex at the thought of the Warmaster system, but I'm looking at options to get my 6mm stuff back out again.
Posted by ScannableGoose at 15:53 3 comments:

Labels: purchasing
Hi all!
I know I've been pretty quiet for a while.
Mainly been loitering over at the Flashpoint Miniatures Forum in between bouts of frantic demands from work.
No progress on painting or modelling, and I haven't even managed to take any pictures of my birthday haul!
As part of the engagment with the Flashpoint forum, I've been doing a lot of vietnam reading and research, so to keep the blog going while I'm in a bit of a hobby slump I'll probably post some reasearch notes etc.
I wished I'd started doing that sooner, because I now have no idea where I found a particular table of equipment for the Viet Cong!
Posted by ScannableGoose at 08:40 No comments: