Long term readers of this blog may remember that about two years ago my wife bought me a bundle of 6mm British Paratroops from Irregular (via Eureka here in Australia). They were originally part of a plan to play Flames of War in 6mm. The idea being, as always, to save money and space as per my 6mm AK47 collection. Since then I've discovered other rulesets ghat have taken my fancy for gaming World War Two, most notably "I Ain't Been Shot Mum" by Too Fat Lardies.
I never did get those paras painted and on the table due to lack of time and too many other projects in 15mm. Recently I've been looking at 6mm again as a serious replacement for 15mm on the table. I can get them onto the table a lot faster than any other scale, which, in theory means more games.
Plus I really do need to finish some of my existing projects before I start any of the others I really want to do.
So, without any further ado, I present 9 platoons of paras and 5 mortar teams waiting to be undercoated. 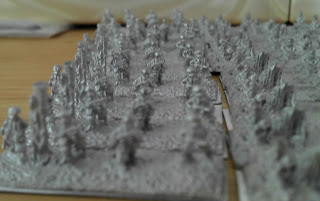 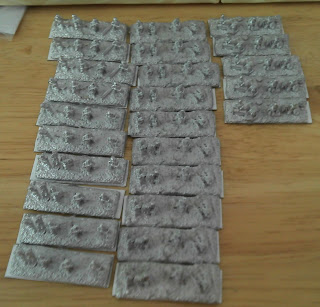 I'm off to search the web for hints on how to paint 6mm denison smocks!
Posted by ScannableGoose at 16:08 3 comments: