A couple of days ago I took a quick comparison shot of my new "VC" against the H&R US figures.
﻿

﻿ Unfortunately it turned out to be against some of my worst hat work, but the size comparison is significantly better that vs the Irregular figures.

Since then, I've started basing the figures.  This was a bad move, as I need to file off their webbing to represent poorly equipped Local Force troops in just "pyjamas" and a rifle. 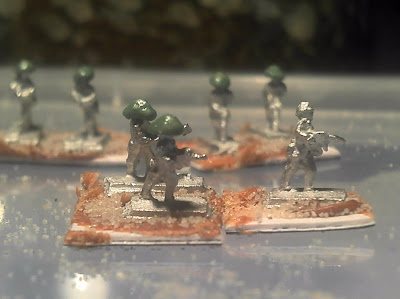 Note also in this picture the figure who is missing their hat because I tried to file some of the wonkiness out of it.  He's so depressed that his rifle barrel has gone droopy.....
The dodgy hats will need replacing rather than fixing it seems.
Plenty of work to get them to where they need to be, but it's a start!
Posted by ScannableGoose at 02:40