A day or so ago I received my copy of the Ambush Valley sourcebook for Force on Force by Ambush Alley Games / Osprey. This is the revision of the earlier AAG Ambush Valley offering, to fit into the new Osprey mould.  Despite what it says on the cover (1965-1975) it covers the Vietnam conflict from the advisory period (1963 onwards) and could probably be used through to the fall of South Vietnam in 1975. It is a lovely looking book, paperback with full colour pages, and quite thick (176 pages plus Fog of War Cards). 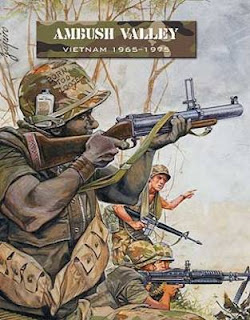 Unlike the "Enduring Freedom" book, which felt a bit "samey" compared with "Road to Baghdad", "Ambush Valley" is a different beast entirely.  The majority of the book in this case is detailed information on organisation and equipment of all of the various forces involved in Vietnam, Laos, Combodia and Thailand throughout this period.
After a quick introduction, the book launches into specific rules for Force-on-Force for this period.  As well as the usual complement of terrain, civilians etc. the book has a section on boats that enables a riverine game straight out of the box; a nice inclusion.

Then we begin the detailed TO&E info, which runs for most of the book.  There is a lot of meat here, however if you are an experienced Vietnam gamer, there may be very little for you here.  For me, the non-Vietnam stuff (Laos, Combodia, etc.) stuff was new and interesting, but the rest was not new.  As I say, it will depend on your pre-existing knowledge of the Vietnam conflict.

Once the TO&E section is done, there is space for a paltry six scenarios, a page or two on solo play, and then it's "roll credits" time.

To be honest I was disappointed by the number of scenarios, as that is one of the primary reasons I have for buying these books.  The TO&E stuff I can read and find, but the ability to have a ready-to-go scenario to play through is very valuable for me.

This book has expanded the scope from the original Ambush Valley and substantially beefed up the organisational data included.  However this has come at the expense of removing the campaign system that was present in the earlier version, and there are still only 6 scenarios as there was in the first book.  This was a major shock, with this book following on from "Enduring Freedom" with its 20 scenarios.
I will still certainly use this book as it pulls together TO&E data that I have scattered over half-a-dozen sources into a single handy volume, and it brings the rules up-to-date with the new FoF.
I do regret the small number of scenarios, and the removal of the campaign system.  For those I'll be keeping by version one copy of Ambush Valley close to hand.

If you are already a Vietnam conflict wargamer, or own the original Ambush Valley, there may be much less for you here than you may expect.
Posted by ScannableGoose at 06:00