Well, work and home have stepped in, in their usual fashion, over the last few months resulting in not a lot of progress on anything related to the hobby.
I did manage to put a bit of a push on over the last couple of days to get some hobby stuff done, and made a few discoveries, which should be the subject of some future posts over the next month.
The big result from this weekend was getting my Falklands War British forces moving along again. 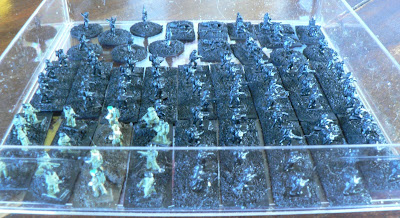 The above picture (click for larger image) shows the four test bases that have progressed no further from this post in February, along with the rest of the Royal Marine company, which (as of this weekend) are now based and ready for the brush.
I'm still note sure what to do with the bases yet in terms of paint (and what colours?) vs. flock.

I'm still don't have any Argentine figures I like.  I will be ordering some more sample packs from H&R later this week in an attempt to locate something in about the right kit but a bit more dynamic than the WW2 US sculpts (ie, like the UK sculpts above).
Posted by ScannableGoose at 23:11