I'm currently painting some Cannon Fodder African Militia. Some of these figures are better equipped in terms of uniform and Webbing, so I've chosen to use them as the Leader figures for my Ambush Alley Games.
I wanted to have the militia leaders wearing camouflaged uniforms, as compared with jungle greens and civilian clothing for the lesser militia.
I found some pictures in William Fowler's Operation Barras book showing Sierra Leone soldiers. Most of the uniforms appeared to be British woodland DPM, but one picture showing soldiers on an assault course seemed to be a different scheme - a really interesting mix of browns and oranges with a touch of green.
So I started trying to paint this scheme. 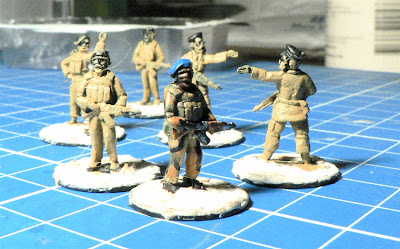 I wasn't happy with the outcome, so I was going to work it up again. I went to scan the image from the book so I could show what I was aiming for....and the picture that came out was British woodland DPM! The image in the book must be colour shifted, and the scanner has shifted it back in the other direction so that now I can see it is DPM. Sooo....
I think I'll be trying to paint DPM, or maybe US woodland.
Either way, this figure needs to be scratched and I start again.
Posted by ScannableGoose at 14:10