As promised in an earlier post I believe that there are a number of alternate uses that the Heroics and Ros Soviet Airborne infantry pack can be put to use as.
First up we have Special Forces.
Below are some UK special forces for my Falklands War games that I've just knocked together (larger images if you click).  These are a mix of figures from the Soviet Airborne and the Royal Marines packs.
This is the first time I've ever flocked or grassed a base, so please be gentle... 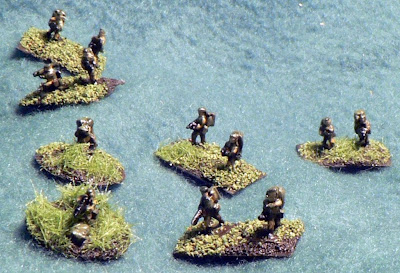 The soviet pack is particularly useful for the sniper figure and the figure with the binocular (both on round bases).

And here are some work in progress pics.
First up the "conversions", which were simply just adding a squarish blob of greenstuff to make bergens for the Soviet figures.

Then the undercoat makes it all look like it was meant to be.

Slap on some paint and you're done!
Posted by ScannableGoose at 23:27