Update and some Argentine Aircraft

Well folks it's been quite a while since my last post.
Things have been pretty hectic with work and around home so I haven't had much chance to post.
On hte hobby front things have slowed down, but not quite as much as the blog posting!
Teh main thing that has been holding me up was getting some figures for my argentine infantry that had more animation than the somewhat parade ground posing of the H&R WW2 US figures.  A batch bits and pieces arrived from merry old england a couple of weeks ago, and so we're back up and running again.  I've done some simple conversions that I want to complete painting before I post them, and I now have an understrength Argentine company based and undercoated.
So more updates hopefully in the month of July.
In the interim I'll leave you with some pics of the Pucara and the Puma models from Heroics and Ros (click on them for enlarged versions)
.
I haven't done any aircraft modelling since I was a kid, and based on my experience with these two and the Wasp and Wessex for the Brits, I think I have a lot to learn.

First the Pucara.  The horizontal tail planes come as a separate piece to be attached at the top of a stub tail cast to the body.  In the front-on pic you can see the kink where they join.

The model doesn't come with any stores for under the wings, so I think I'll need to pick up some suitable rockets and bombs from somewhere.

Next the Puma.  Not sure whether to put the blades on as provided or replace with transparent plastic disks for that "blades rotating fast" look.  I have a lot of helicopters to do for this project and I probably need to select one method or the other....
Keen for any advice. 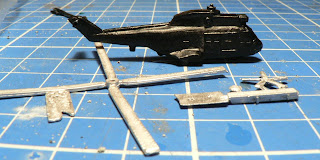