I wanted to have some slingers for the missile troops for my Romano-British army for MicroDux.
To that end, I decided to use the E18 - Barbarian Infantry Slingers from Irregular Miniatures.
As you would have seen in an earlier post, these come mounted on a thick solid strip with 6 figures.

But I wanted single figures to fit in with my MicroDux basing.
The solution was to cut up the strip, but how?  The Irregular figures have a thick base and I'm not getting through that with a pair of pliers....

...Recently I came into possession of a scroll saw..... 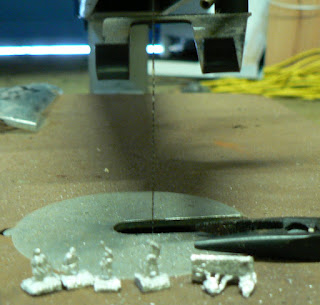 Magic!
The trick here is to use the saw to deeply scribe the underside of the strip and then wiggle the figure off to break the last bit.  If you cut all the way through with the saw, you'll send the figure flying.
I used a set of pliers to hold the strip and keep my fingers out of the way.
Just hold the strip against the blade and let it do its work nice and slow, rather than applying pressure to the blade.
I'd also recommend eye protection and probably a face mask as you probably don't want to be breathing in the dust from the alloy.