Well I drafted up a few posts over a fortnight ago, and this is the first time I've had a chance to get to them to finish any of and click publish!

Below are more strips of figures from the Irregular Miniatures 6mm "Imperial Rome and Enemies" range.
Many of them, such as the legionaries are close based, and so not going to be suitable for what I want to do with this project, although the Picts, Scots/Irish, and possibly the auxillaries, may be useful, particularly for the upcoming Raiders expansion to the game...
As always, click on the image for a larger version. 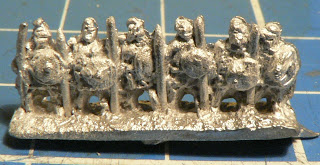